"This historical and utopian obsession with the Fifth Empire seems to have become a reality again. One that has already been tried out by the U.N. and is now being carried out with deep conviction by the European Union. In the meantime, the world is today submitted to a sort of return to the Middle Ages, subjected to an implacable terrorism that victimizes the innocent and which disturbs the U.S.A. as much as Europe, attempting to destroy western civilization. This is a sort of return to an atavistic and incoherent struggle, which is also a return to the mythical Fifth Empire, to the desired one and the hidden one... These are the reasons leading me to give this film the title: THE FIFTH EMPIRE – YESTERDAY AS TODAY." – Manoel de Oliveira

What is the Fifth Empire?

What does Camões have to do with it?
Luís de Camões, the singular Portuguese literary figure, wrote Os Lusíadas, the great Portuguese national epic. Os Lusíadas chronicles Portugal's voyages of discovery during the 15th and 16th centuries, and shares the sense of a people's great (divinely foreordained) destiny with Virgil's Aeneid. Camões printed the work in 1572, for which he received a stipend from Sebastião. Os Lusíadas, like The Aeneid, is a myth of the past that informs a near-messianic vision of the future of the nation. The poetry of Camões shows up sporadically in O Quinto Império.

"This film to which I am giving the title THE FIFTH EMPIRE - YESTERDAY AS TODAY is based on the theatre play EL-REI SEBASTIÃO, by José Régio. José Régio (1900 to 1968) was a critic, poet, playwright, novelist and essayist; he was a major figure of his time and of today, and the play, as he stated, intended to analyse the King, the Man and the mythical character of the Portuguese King Sebastião.
Sebastião, after the overwhelming defeat at the Battle of Alcácer-Kibir (1578), better known as the Battle of the Three Kings, after which his body was never identified, became the myth of the hidden one, having previously been the desired one and the one destined to receive the myth. A myth which is indeed sung and exalted in the sermons of Father António Vieira (XVII Century), by the philosopher Sampaio Bruno (XIX Century) and in the XX Century by the poet Fernando Pessoa and by the philosopher José Marinho, among other Portuguese writers and psychologists, as well as by some foreign researchers.
Curiously, this myth is also part of the Muslim mythology with the same nomenclature of the hidden one and, just like King Sebastião, the same is supposed to take place with the Muslim Imam (that of the twelfth generation) whose common belief is that he will come on a white horse on a misty morning in order to finally defeat the evil of the world and establish harmony among people." - Manoel de Oliveira

This Oliveira quote gets at why Sebastião is such an interesting figure from a Portuguese perspective, but sidesteps the actual plot of the movie. The film is the process of Sebastião deciding to embark on the crusade that leads to the Battle of Alcácer-Kibir. A bit of background:
In the 16th century, Christian Europe was in the midst of a centuries-long existential conflict with the Muslim world. In 1529 the Ottomans lay siege to Vienna (as would happen again in 1683). The Iberian peninsula had only been retaken from the Moors in 1492. In 1571, the Turkish Sultan had been defeated at Lepanto by Christian forces commanded by Don John of Austria, King Sebastião's grandfather. This film chronicles the leadup to Sebastião's 1578 campaign into Morocco (to choose sides in a civil war). Sebastião ignored the wisdom of his advisers and invaded, leading to the ruin of the Portuguese nation -- it disappeared as an independent nation from 1580 to 1640 (or, arguably, until the end of the Portuguese Restoration War in 1668).

Let's review: in the midst of a long, existential conflict with the Muslim world, a ruler tries to replicate the success of his father - sorry, grandfather - and embarks on an ill-advised mission against the advice of experienced leaders in the country, leading to the ruin of his nation. Oh, and he believes that God put him on the throne to begin with, and hears voices encouraging his actions? Perhaps now is a good time to remind you of the subtitle of the film...

It's clear, though that Oliveira is doing more than critiquing the Bush administration. His first quote tips us off that his critique is of the entire neoliberal order, and the quest to extend global capitalism. Oliveira's implication is that this extension of the values of the West - including capitalism, and even democracy and individual rights - shares essential characteristics with the religious and political aspirations of the Age of Empires. I'd argue that Oliveira doesn't oppose those values so much as recognize that the exertion of power taints both victor and victim, and thus calls into question the exercise of power in "defense" of (or rather, for the extension of) Western values -- rather than questioning the values themselves. Or perhaps I'm projecting...


Stylistically, this is very much a Manoel de Oliveira film. Oliveira uses long static shots of people seated and talking, often while not facing each other. In spite of this, the pace of the film is made (relatively) fast due to how much is being said; for Oliveira, content frequently lies in what we hear. This theatricality and staginess is important to Oliveira because he fully believes that sound is a more important storytelling mechanism than the camera.

And yet, the cinematography is stunning; the pictures I've posted do poor justice to a chiaroscuro brilliance that calls to mind the best of Rembrandt, or the most dramatic lighting of John Alcott's/Stanley Kubrick's Barry Lyndon. Cinematographer Sabine Lancelin has shot 6 films with Oliveira (most of his recent output), 2 of Chantal Akerman's, and shot Philippe Grandrieux's Sombre. This film is like 3,000 frames of glorious renaissance art, full of vanishing points and shadow and candlelight.
The pace of the film and its artful use of light allow the embrace of architectural beauty; lancet arches and other Gothic forms become focal points in the frame, further historicising the film but also creating a pure formal beauty. 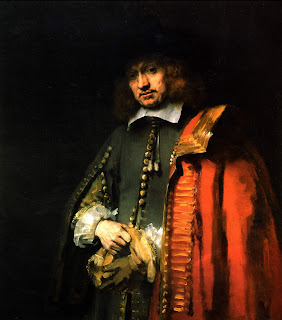 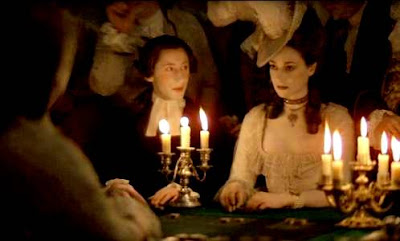 Great post and thanks for the historical background! I'll be posting a response to the movie and your article in my screening log later today.

Article plus récent Article plus ancien Accueil
Inscription à : Publier les commentaires (Atom)
Before familiarity can turn into awareness, the familiar must be stripped of its inconspicuousness; we must give up assuming that the object in question needs no explanation. However frequently recurrent, modest, vulgar it may be, it will now be labeled as something unusual.