a sense of place screening

This coming Tuesday Sept 23, my most recent video work a sense of place - currently available for viewing on The Auteurs - will screen as part of the New York Experimental series at The Tank, along with work by Daniel Butler, Alexis Powell, Gina Telaroli, Jack Beck, Kate Pelling, Brian DeLevine and Isshaela Ingham, Akosua Adoma Owusu & Romulo Alejandro, and Elizabeth Riley. The screening starts at 8 PM. This will be the first screening of a sense of place outside of The Auteurs; I'm excited to see it with an audience for the first time. 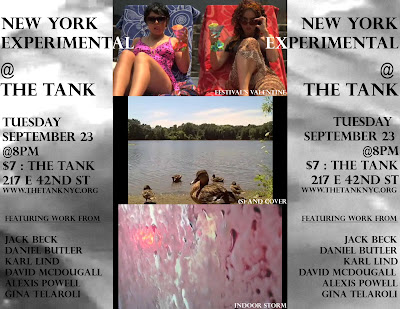 She stood in line, reading the New York Review of Books; first finishing an article by Oliver Sacks on manic depression, then beginning an article on Emily Dickinson written by Joyce Carol Oates. She seemed like the kind of woman waiting for her Byron, or perhaps that was just the confluence of the pieces she was reading and the romantic film that she was in line to see. She wore her light brown hair in an easily-pinned chignon, not quite done up in a bun and with the ends just a bit loose. A black demi-cardigan covered a black vintage dress that might instead have been only designed with a long-past age in mind. She was slim with lively light eyes and a feminine air that she doubtless encouraged by dressing as if she lived in that now-eclipsed time when women and men lived largely in separate cultures.

Next to her stood a man of about the same age, dressed perhaps a bit too casually and colorfully for her to notice, holding a small, well-worn copy of The Age of Innocence in which he held his ticket. Both stood silently at the end of the line - which snaked, in their wake, out the door of the theater - for longer than expected as the previous film ran just behind schedule. Before picking up her NYRB issue, she had read the program for the rest of the David Lean films playing those two weeks. He had nearly recommended one in particular ("If you like David Lean, you should make a point of catching The Passionate Friends tomorrow evening"), but had hesitated. Just after his hesitation, his heart began to pound a bit more heavily than it should, and he thought of Newland Archer.

In the silence that followed his hesitation, he noticed her hair, and the small spots on the back of her neck; he caught just the outside of her eyes' brightness from his oblique angle. As the line began to move, he decided to sit in her row, or at least nearby, to offer himself another chance at conversation after the film. Before making it into the theater, he spotted a friend exiting from the first half of the double-feature; this friend suggested they sit together near the front, his usual preference. The woman in the black dress entered a row just behind the middle of the theater, which our prospective Byron noticed as he walked to the front. When the lights came up at the film's end, he turned to see her begin to walk out, but the theater's crowd kept them well-separated. He tried an alternate exit but found himself stuck in a narrow hallway behind a slow-moving older couple, angling for an opening through which to cut them off. When it finally came at the hallway's end, he hurried outside as if to catch her. Not seeing her in any direction, he returned inside, hoping that she had gone the restroom after the film's end. Standing as best as possible between the crowds of the lobby - entering, exiting, buying tickets, queuing for concessions - he looked for her. After a few moments, she walked toward the exit, and he and she saw each other, briefly, in the way one sees a person and perhaps, if one has already decided to notice, notices deeply but without betraying this depth.

A moment later he traced her path out the door and turned to catch sight of her direction. She walked briskly west. He had waited long enough that she was far away, or at least seemed so, by the time he had walked outside. He had wanted her to turn, to turn and smile for a moment and then keep walking, but she couldn't have known that he was looking toward her, and besides it would have broken the reserve that both had shown thus far and so clearly admired. If she had known he was standing there she wouldn't have turned, and if she had known he was standing there and she had wanted to turn she wouldn't have turned. So she walked all the way to the train without turning as he lost sight of her, and after waiting for his friend he walked to the same platform, barely missing the train she had taken and unsure whether she had taken the train at all.

The Passionate Friends plays tonight at Film Forum in New York. It is unmissable.


Brief Encounter is unquestionably the greatest English-language film ever made. 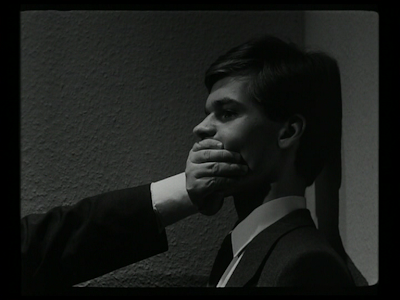 my piece on Jean-Marie Straub and Danièle Huillet’s Klassenverhältnisse (Class Relations) is up at The Auteurs' Notebook.
Posted by David McDougall at 19:54 Aucun commentaire:
Envoyer par e-mailBlogThis!Partager sur TwitterPartager sur FacebookPartager sur Pinterest
Labels: America, Class Relations, Danièle Huillet, Franz Kafka, Jean-Marie Straub, Straub-Huillet
Articles plus récents Articles plus anciens Accueil
Inscription à : Articles (Atom)
Before familiarity can turn into awareness, the familiar must be stripped of its inconspicuousness; we must give up assuming that the object in question needs no explanation. However frequently recurrent, modest, vulgar it may be, it will now be labeled as something unusual.