The Democratic organisations, on which he could still have leaned in the Autumn, were in ruins. The City had betrayed the little man according to all the rules of the art, except the one that prescribes that the victim shall not notice anything.
— the banker Mummlius Spicer, from Brecht’s The Business Affairs of Mr. Julius Caesar.

To show, above all. To show the possible. That's all.
— JLG

Not so much a fantasy double bill as two films, and three filmmakers, that meant a lot to me this year. Looking back, it seems the year’s great films about the political and spatial decay of the present — Patrick Keiller’s Robinson in Ruins, Thom Andersen’s Get Out of the Car — could only be paired with films by Jean-Marie Straub and Danièle Huillet. I’ve clung to these two for their clarity, their abstractions, and their hope.

WHY: Two films that use the act of giving depositions as a means to explore the interactions of individual emotions and history: David Fincher's The Social Network (2010) uses deposition-based set pieces to showcase the personal grievances that help drive the creation of a new form of social interaction, a sort of computer-powered social efficiency engine. In The Nightcleaners (Part 1) (1975), the Berwick Street Film Collective uses interviews to show the human cost of daily underpaid drudgery and unfairness—the personal grievances that result from participation in an engine of grand economic efficiency. 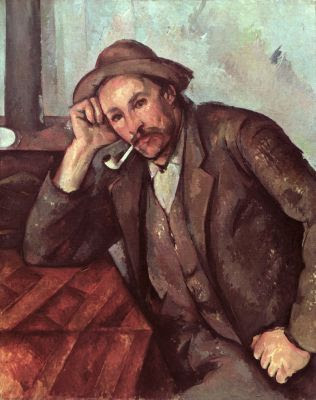 Paul Cézanne, The Smoker, 1891
Posted by David McDougall at 18:27 Aucun commentaire:
Envoyer par e-mailBlogThis!Partager sur TwitterPartager sur FacebookPartager sur Pinterest
Labels: painting, Paul Cézanne
Articles plus récents Articles plus anciens Accueil
Inscription à : Articles (Atom)
Before familiarity can turn into awareness, the familiar must be stripped of its inconspicuousness; we must give up assuming that the object in question needs no explanation. However frequently recurrent, modest, vulgar it may be, it will now be labeled as something unusual.